The Fair List web site has been up and running for a couple of months now. The response to it has been wonderfully supportive. Thanks to everybody who has written in asking for their name to be added to the supporters’ list, and to those who have contributed ideas and photos, blogged about us, or started discussions on social networks. All the good things you contribute find their way onto the website under one section or another or are implemented in real life as soon as is feasible!

For this month’s blog, I thought I’d look around to see if anybody else was doing the same sort of thing as The Fair List. I found two companies that are interested in women speakers.

The first one is ‘Purple Tie Promotions’. Thanks to Sandie Mourao for sending me a link to their web site at www.purpletiepromotions.com.
Purple Tie Promotions is a company that offers women speakers for all types of events including: after-dinner speeches, industry specific events, small group meetings within the business sector; inspirational career events, small group talks at Universities, Colleges and Schools; and selected charitable events.

There is an unusual twist however, since their web site says their speakers have all…
‘…served in the Armed Forces AND are passionate about sharing either their personal or professional journey with others. They pride themselves on not only their professional achievements but also success in the worlds of professional/semi professional sport, business, industry and education – highlighting intrinsic core values as one of the fundamental elements to success.’

And the next part of their text is the part that chimes in somewhat with The Fair List…
‘Purple Tie Promotions believes in encouraging successful, professional women to support other women. This will be achieved by raising the awareness of women’s charities at annual and bespoke fund raising events.’ 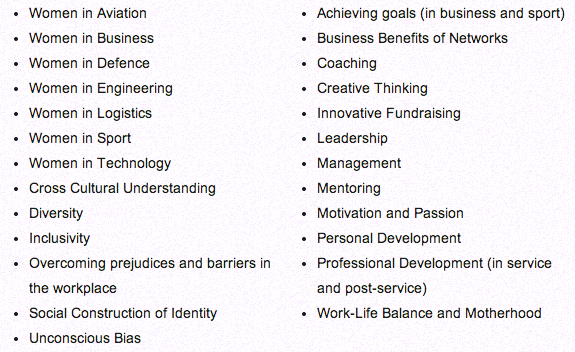 I contacted Ann, who launched Purple Tie Promotions in May, 2013. She said:

“Having spent 24 years in the Royal Navy then 12 months in a not very challenging job, I was looking for something a little more mentally stimulating. I began to notice the lack of quality and engaging female speakers at the various events I had been attending. I decided to do some research and found that there were very few women regularly speaking about the diversity of their achievements and experiences (professional and personal). Also those that did speak were not easy to find by those who would benefit from listening to them.
During my time in the three Armed services (Royal Navy, Army and Royal Air Force) I have been lucky to develop a very interesting and broad-ranging network of friends. These women are very successful in their own right in what is a male-dominated environment. And this gives them the confidence and belief to succeed further when they leave the Armed forces. I believe that getting this message out to other women can inspire them to take steps to mould their own destiny. The variety of professional subjects the women can talk about provides a good vehicle for contextualising personal experiences.

So I am in the early stages of developing this company. I have already had interest from women’s groups (e.g. Women in Technology, Women in Engineering, the Women’s Room) educational establishments (universities, colleges, academies), and from large, successful businesses (e.g. Ernst and Young, The Police and City Councils. I currently have 20 speakers and a few more requesting to join the list…..
So that’s where I am so far – busy networking and following leads to develop the company. I am just about to employ a friend to assist with administration as interest is picking up and requests are coming in.”

In next month’s blog, I’ll tell you about the second company I came across… somewhat high-end financially though. So those speakers come with a bit of a price tag!

All good wishes til then.
Tessa

Welcome to The Fair List blog !
Here, guest bloggers and I will pass on news of events, websites and discussions around the topic of gender balance at ELT, UK events. If you think we have missed something or want to comment, please get in touch.

Thanks for visiting,
Tessa Woodward